Zahra Owens is a multilingual globetrotter who loves big cities but also has a weak spot for the wide-open spaces that are so rare where she lives.

She likes her men every which way they come and never tries to change them. Men who are tough on the outside but have a huge soft center get extra credit, though, as do the strong, silent types who think they hide their damage well… but don’t. She makes it her personal goal to find them their happily-ever-after, even if the road toward this leads via hospital beds, villas with gorgeous vistas, or ranges full of horses.

Zahra is a proud member of the Rainbow Romance Writers, a special interest chapter of the Romance Writers of America, and won’t quit until M/M romances are treated like every other romance story. RWA allowed her into its Professional Authors Network, but she hasn’t quit her day job yet since it allows her to work in a man’s world. And what girl can resist that?

If Zahra had her wish, a day would have at least thirty-six hours, because how else would she find the time to finish all the novels still inside her head? 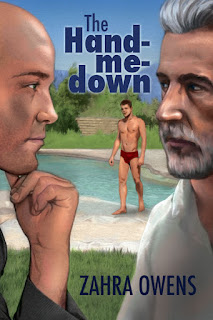 I’ve always had an overactive imagination. I think I wrote my first story in first grade (something about a princess, I’m sure). I didn’t get serious about it until I discovered fanfiction, in the early 90’s. We wrote X-Files stories and posted them on the official boards. It was a very exciting time!

Years later I was writing Lord Of The Rings fanfiction and the stories almost always ended up novel length so I knew I could do it. A few of my fellow authors were submitting stories and they told me I should try as well. The story got accepted and it became my first novel. The first person I told was actually a group: my fellow fanficcers. The result was mixed at best. The positive ones are still my friends. The negative ones disappeared (I wonder how that happened?).  I didn’t tell my mother until I could show her an actual paperback copy. Her reaction was: “Now is you next book going to be straight romance?” I answered “No” and never looked back. She knows I mean it.

Inspiration is everywhere.  Sometimes it’s a song, sometimes a newspaper article, sometimes an actor I like (still a fanficcer at heart). I’ve been known to invent stories about people I see on the street.

My charity story You Can Choose Your Friends was inspired by the It Gets Better Project and that’s why I donate my royalties to them.

Most of the time it’s a gut reaction. Some stories cry out to be written in first person. Some people don’t like this, but I can’t go against my characters’ wishes, no matter how hard I try. The first few chapters of The Hand-Me-Down were rewritten more than a few times because I wanted to try and force it into third person so I could at least change POV occasionally, but Jez wouldn’t have it. He’s a bit of an alpha male and didn’t want to let anyone else tell the story. Well, he got what he asked for.

The title often comes quite early in the story as do the character names. If either of those are wrong, the storytelling stops, because the characters will refuse to talk to me.

My characters are sort of fictional. I stay very far away from people I’ve met in real life, because I wouldn’t want anyone I know to recognize themselves. (If they do and I didn’t base it on them, I’m fine, but if I did base it on them, I’d be mortified if they discovered it!). I can’t imagine every little bit about them, though. I need references. I love using actors as the basis of my characters, and I basically write parts for them to play, but besides creating a look-and-feel for them in my head, the actual character is all in my imagination. The three characters in The Hand-Me-Down were based on two gay porn stars and an Aussie actor. I had numerous pictures of them in my inspiration folder. The cowboys I’m writing for my fourth cowboy novel are also an Aussie actor (different one) and a British actor. Both will “play” all-American men, though.

Finishing that book (and I mean that about every one of them I’ve written)! I meet a lot of different people in real life and if they know you’re a published author, there’s always one who tells you he is also writing a book. I’ve met very few who’ve actually finished it. No, strike that. By now I’ve met a lot of people who’ve finished that book, because I meet a lot of people through my writing who are also published like me.

That’s a tough question, because I’ve been burned. In my fanfic days I co-authored quite a bit and loved it! A few years ago I wrote a short story with someone and it ruined a great friendship. Don’t know if I’m willing to try my hand at it again. I could throw a few names around, but again, I don’t want to risk the friendship I have with these people (Ariel Tachna, Amy Lane, JP Barnaby, you know who you are!)

I’m sure tons of people have read these books, but I have a hard time recommending ones very few people have read because I’m playing catch-up in my reading. See, I didn’t grow up reading English language books, so I’m always late to the game!

Right now I’m reading a book about relationships and how bonding as a child has its effects on how you choose a partner (it’s non-fiction and written in Dutch)? I consider it both personal growth and research since I always write rather emotionally ruined characters.

Actually sitting down and writing. I, like most people, I’m sure, have too much going on sometimes. I need to make time to write. Add to that the fact I am a very undisciplined person and you can see how time gets away from me. Once I make the time and sit down to write, it usually flows.

A typical day for me is an actual working day (as in the sort of work that brings home the bacon) where I leave for the office at eight and don’t get home before six. Then it’s eating and winding down. Sometimes I write, sometimes I don’t get around to it. Sometimes I avoid writing to answer people’s questions (LOL!)

I don’t wait for inspiration. Inspiration strikes at the most inopportune moments (Late at night when I’m trying to fall asleep? Check. Sitting in gridlock traffic? Check. Trying to finish a last minute project at work and against a deadline? Double check.)

Goals work and don’t work for me. NaNoWriMo is about the only goal that actually makes me produce masses of work. My own goals generally don’t.  Like I said, I’m undisciplined and a rebel to the point where it’s detrimental to myself. This year I’m Secretary for The Rainbow Romance Writers (Special Interest Chapter of the Romance Writers of America) and on our Forum we set writing goals for ourselves every month. Doesn’t look like I’ll make it this month. Guess I’m not making the best impression!

My greatest guilty pleasure is still fanfiction. I try to limit myself to reading, though, because reading in itself is enough time-suckage and a perfect escape from my ‘duties’. If I get too involved I’ll want to start writing it again and then it takes away from my actual projects for which I have little enough time as it is.

Right now I’m working on two novels, one of which should have been finished last year. Sorry about that.

One is the fourth novel in the Clouds and Rain series called Moon and Stars and the other is something entirely different about a Crown Prosecutor in London and the cop who is supposed to do his investigating.  Neither of them are ready for excerpts yet, so you’ll have to be patient!

You can find Zahra at http://zahraowens.com.
Or buy her books from Dreamspinner Press here: http://www.dreamspinnerpress.com/store/index.php?cPath=55_129
Posted by Unknown at 00:00