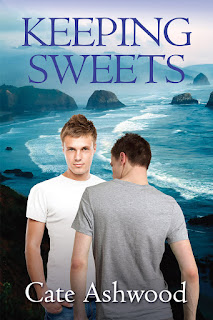 Evan is from a little town called Fairfax. This is the first time he's been in a larger city and has been called in for an interview with Les, the owner of the company, and Bran, who stage name is Noah, the star. Evan has already undergone the initial interview, and this is the scene where he films his "casting couch" interview to go live on the website.

Keeping Sweets will be out March 11th from Dreamspinner Press.