After a minor in creative writing in college, Andrew Q. Gordon decided to become old and stodgy and went to law school. At the urging of his partner, he returned to creative writing almost two decades later . Still working as a lawyer, he and his husband of seventeen years and their dogs live in the DC area. In 2011 they welcomed their daughter into their family. Andrew still manages to write after the last diaper is changed and he unwraps himself from his daughter's little finger. 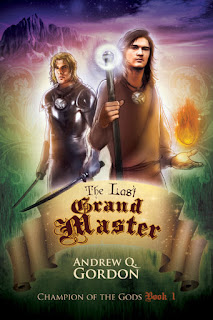 I started writing in college – I had this story inside my head that took shape during idle time – showers, walking to and from school, riding the train with nothing to read etc. So I used the independent study credits, found an advisor and created a creative writing class for myself.

‘My’ first story that was submitted, was actually a co-authored story – both ‘firsts’ were actually.  Anyta Sunday and I wrote two stories in 2011. One – Bettor To Lose - we submitted to Gay Authors for their novella contest. That won first place.  The second – (Un)Masked we shopped around to publishers. Dreamspinner was the second publisher we submitted it to. Obviously the first one didn’t accept it.  I did rather little with the submission process, I’d just had a baby and Anyta offered to take the lead and that worked out perfect for me.  So the process was rather painless for me.

When we got the acceptance, I was at work. It came fairly early in the day as I recall, so I didn’t see it until later.  In fact I didn’t recognize the sender and I didn’t read it at first.  So when I finally read it, I told my husband and quickly got in touch with Anyta to engage in a bit of virtual high fives.

Depends on the genre.  For romance, I think part of it comes from my past experiences and some of it comes from some ideal I wished I’d done or experienced.  Fantasy/Sci fi – that comes from all over. Sometimes it’s a piece of music that evokes an image. I then try to put word to that image and fill in the story.  For the most part everything comes from a visual I ‘see’ in my mind.  Without that clear image, I don’t think I can write a story.

Point of View is usually third person. It’s what I’m most comfortable using. I remember trying to use 1st person for the 1st time and it was a cluster of past/present mistakes.  I’d slip into almost dialogue mode for some of the narrative and . . . . it was a mess.   I’m not a huge fan of multiple voices. I feel getting two MC’s perspectives kills a lot of the tension so I generally stick to just one.  The exception will be in future books of the Champion of the Gods series. There I’ll use a second perspective for a chapter or two so I can fill in plot details. But as a rule, I’m not a fan.

Some titles come easy – they even ‘write’ the book, others are impossible to find. Purpose will be my third published book and will come out in June or so.  There, I had the title before I had the entire story.  The Last Grand Master has had four three working titles before Dreamspinner and I decided on the current one.

All my characters are fictional. There is very little of me in them. There might be elements – like – one might enjoy baseball or play soccer or drink coffee or like punk rock. But none are modeled on me or other people I know.  I don’t think I’ve ever written a character that I could say I’m most like. I might like to be one or two of my characters – Farrell from The Last Grand Master is an amazingly powerful wizard – so yeah, I could see me wanting to be him.

Nothing yet – I don’t feel I’ve really accomplished anything exceptional yet.  If I can get to the point where I’m successful enough that I can take a flier on quitting my day job, then I’ll say I’ve accomplished something of note.

I’ve already co-authored two books with Anyta Sunday and I’d do as many more together as we could. She is – in my mind an amazingly gifted writer and so easy to work with. It was maybe the most fun I’ve had writing something. Does that count?

Not many is relative term I suppose.  Very little gay fiction is ‘widely’ read along the lines of a best seller. I’d say What Binds Us by Larry Benjamin.  I thought it was extremely good.
Right now I’m reading Brute by Kim Fielding. Also quite good.

Haha typical?  Well, work days, I get up get ready for work, wake the baby, change her, give her some milk, sit with her for a few minutes then put her back to sleep and go to work.  Work days varies. If I have trials, they’re hectic, getting witnesses, police officers, evidence and case files together in time, then coordinating everything doesn’t really follow any set pattern.  If not, well they can be pretty calm.
Inspiration isn’t something I wait for.  I’ve so much bouncing around in my head I doubt I have enough days left in my life to get them all out. I don’t really set goals. To me artificial goals are meaningless because if you struggle to get to that goal the finished product might not be worth the effort.

Does Ice cream count? A day off with nothing to do is about as good as it gets some days.

In addition to The Last Grand Master, that came out on Feb, 1. Purpose – Should be out in June. Purpose is a darker story than normal for me. It follows the human host of a spirit of vengeance as he struggles to regain his lost humanity with the help of someone he saved from being killed. Beyond those two, I’m not sure if anything else will come out in 2013.

Right now I’m working on book two of the Champion of the Gods, Series - which is tentatively going to be called The Arm and the Eye. There are several other projects in various stages – One I’ve titled Archangel, which is tangentially about angels. I’ve got a college age story in the works, but I’m not sure where that is going. And I’ve got another series I’d like to do that I’m tentatively calling Dlgen. In that there are five orders of Dlgen – which are lords of the sword or god touched warriors. It will follow the young adopted child of the only living fifth Order Dlgen as he tries to keep alive an arrogant prince who might be the only person who can keep an ancient enemy from reclaiming their world.  But it’s just a concept right now.
In the end, I’ll probably only finish The Arm and the Eye and maybe a sequel to Purpose that I said I’d never write. In other words, I have no idea beyond Book two of Champions.

Thanks for the chance to sit on your couch.

Visit Andrew at Dreamspinner Press or on his website