Faolan Kurayami has always enjoyed writing. She has been encouraged by her mother and sister to follow her dreams to get published. It’s always been a dream of hers to see her books enjoyed by readers. She lives with her sister, a crazy rabbit and a cranky old ankle biter. In her free time she enjoys reading, writing and anything to do with anime. Currently she is a college student in the Game Design Program. Faolan enjoys reading a lot and it varies on the genre. She’s always battling plot bunnies so there is no telling what you’ll see from her next. 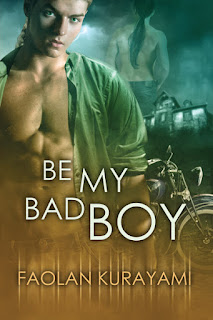 How did you get started in writing? What made you decide to submit your first story and what was your experience with that? Who was the first person you told when you got your first contract and what was their reaction?
I got started in writing as a kid. I read a lot and wanted to created something that people could enjoy. I wanted be published for years but never had the ideas how, I didn't even know M/M was published unless it was anime or manga until I joined a yahoo group of writers. They pointed me in the right direction. I went to DreamSpinnerPress and saw their submission calls page. I went with Cross Bones in hopes I get accepted because the idea prompt inspired me. I was denied. But I was able to turn around and resubmit it as a normal book and was accepted. It was actually my sister who told me I was published, she'd checked my email for me and was bouncing up and down. I then called my mom and she was really excited.

I get inspiration from many places. Just the other day I was looking at pictures of fantasy and I got several ideas. I listen to music a lot of the times while I'm writing and that is actually a great help in setting the mood for that scene I'm writing. I also get ideas and inspiration from other books, movies, anime/manga, nature, and so on.

How do you make the important choices when it comes to writing your stories? Point of View? Voice? Theme? Genre? Title?

I don't have any issues choosing Point of View because I prefer to read in third person so I write in third person. I sometimes read first person but not often. I write in many themes. I like Holiday stories and Paranormal. I write in several genres as well but all of them, either m/m or m/f, have romance. I like writing suspense, paranormal, romance, adventure, fantasy, and I'm looking into Steampunk. I choose titles from songs I listen to a lot that fits with the story I'm trying to tell.

No, My characters aren't purely fictional. I use traits from people I meet or know sometimes to make a character personality but I haven't really created a character after anyone. Although I won't say it isn't a possibility. I don't have a character that's really like me in my book. I hope that I am portrayed in someway through my writings though.

I consider my greatest accomplishment as a writer to be the day my first book was approved for publication.

That's a tough question but RJ Scott, Kendall McKenna, Augusta Li, SE Jakes or any of my Facebook friends. But for a m/f story it's still a chard choice, I think I'd like to co-author with Cherry Adair, Nora Roberts, Christine Feehan, Angela Knight, Laurrel K. Hamilton or Sherilyn Kenyon. It's hard to pick really because there are a lot of great writers out there. I would really like to co-author with my sister and three closest friends.

That could go for many m/m books. I don't think they get enough recognition. I can't choose a book off the top of my head but one style more people should read of any age would be Young Adult. There are many great books in that section out there and they don't get seen or read often enough because people overlook them so easily and they don't get enough advertisement.

I currently reading Fatal Affair by Marie Force. It's a great story filled with suspense, mystery, romance and the need to prove one's self. It's a great book so far. Oh! I did think of a book. It's Desert Rose by Laura Taylor. It's an amazing book and should be read by everyone.

The most difficult part of writing for me is writing the end. I hate to end a story because those characters are a part of me and it's like goodbye to a friend you won't see again for a long long time. It's a little easier with series but those end at some point too.

A typical work day for me is a bit crazy at times. I have college going on so writing has to wait until that work is done. I write anywhere I can take my computer. I don't even have to have internet, although it's easier when I do in case I need to search for something or look something up. I don't set goals. I can't use an outline, drives me crazy. I don't wait for inspiration since usually I'm able to go on with whatever I was writing previously. If I get stuck I work on a different scene or a different book.

My greatest guilty pleasure...hmmm....That would have to be candy, video games and anime/manga. I love all kinds of candy as long as it doesn't have solid nuts (excludes peanutbutter) or coconut. I am open to trying different kinds as long as they don't have the previously mentioned. I am a huge fan of anime/manga. Naruto, InuYasha, Sailor Moon, Blue Seed, Kekkaishi, FullMetal Alchemist, Persona, Ghost Hunt etc. I really enjoy anything paranormal be it werewolves (or others), vampires or ghosts. Video games are great inspiration! I enjoy RPGs, fighting and shooter.

I am working on the next book in the series with Be My Bad Boy. Also a long fantasy novel that has been bugging me to write the last few years. It's a fantasy/romance/adventure. The title is loosely called Magical Kingdom but will be changed or added to at a later date.

A short synopsis for Magical Kingdom is Three Magical Kingdoms must unite to defeat an evil Wizard King. The rulers sent out three sons and three guards to battle. One son is a neko, one is a kitsune and the final is a fallen. Each guard was bound by magic to protect their charge. The fallen son was sent out by his mother in hopes that he would die in battle. Slowly along their travels the princes and their guards fall in love.

Find her at Dreamspinner Press, or Facebook
Posted by Unknown at 00:00