Yesterday was a really amazing day. After incessant refreshing of the Dreamspinner Coming Soon page, my book finally showed up. There it was, right at the bottom of the page, the gorgeous cover Brooke and Paul did for me, and there was my name right next to it. And the icing on the cake is that it snuck on there just in time for people to take advantage of the Mardi Gras sale! 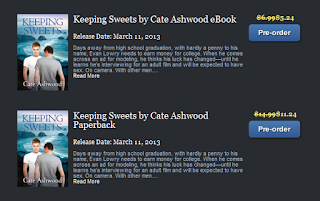 I wrote a book. I did. A real book. That is now for sale. I am no longer just a writer. I am an author. A real one.

I didn't know how happy seeing my book on the website would make me. I've been envisioning it for months and when it finally happened, I was home alone. I didn't have enough phones to call everyone I wanted to tell all at once.

So that was exciting news chunk number one. In fact, here is a section of a screenshot to commemorate the event.


Number two came at the same time in the form of my ad pack. I have been drooling all over my cover since I got the final draft, and now I have a whack of stuff to go with it. I am beyond happy. In fact, that banner you see at the top right there? That's one of the files. Awesome, is it not?

Number three came a few minutes later when I realized that the Dreamspinner website was not the only place where my book could be found. That's right. It's on Goodreads. Despite the nightmare that I had last night it was exciting to see (not a single person read my book, DSP cancelled my contract and banned me from submitting ever again, and somehow, even though no one had read the book, it had a rating of negative six on Goodreads... and I was a tango teacher on a cruise boat).
Seeing it on Goodreads made it seem more real, somehow. So that was number three. I also got to apply to link the author profile with my personal profile, so I am now officially an author on Goodreads.

The final bit of super awesome exciting news is that my unconscious prophecy has already been avoided. Someone ordered my book. Henrietta Clarke tweeted about it, and here it is so I can remember forever. SO EFFING EXCITING!

So that was my day, and it was one of the best days I've had in a long time.

Any ideas on how I should celebrate?
Posted by Unknown at 10:30