The Food of Choices


Today we have Grace R. Duncan here to talk a little bit about the delicious worldbuilding of her new novel Choices.

Today, I bring you the last of my worldbuilding posts about the Choices world.  I thought I might talk about the food and culture surrounding Neyem, since it is the main portion of my Choices world.

The culture is similar to many other Middle Eastern countries, though I didn’t go into it too far.  In my history and politics post, I discussed the government as a simple Arabic replica of the English monarch with a malik, amirs and several other ranks of nobility. What I didn’t point out there is that most of the ranks are held only by men.  It is something of a male dominated society and as much as I would have liked for it not to be (I am not a fan of them), for historical accuracy, I knew it needed to be.

What I would like to focus on, however, is the food of Neyem.  Like I did for other aspects of the world, I did a ridiculous amount of research on Middle Eastern foods.  Some I was already familiar with and expected – flatbreads, lamb, hummus and the like.  I have had more than a few friends from different places in the Middle East and so I have been exposed to the foods before.

However, there were a few dishes I was surprised by, though I suppose if I’d given it more thought, I would have realized.  It turns out that one of my favorite deserts, rice pudding, is actually quite common for there.  When I looked into the fresh fruits and vegetables, I was also surprised to discover that tomatoes, peaches and apples were also quite common.

Like most worldbuilding, however, we authors like to take what is real, figure out what works and toss out the rest.  In this case, though, I thought that most of the foods I found worked quite well with my world.  The only thing I decided to change was the manner in which they ate.

My research found that traditionally the food was served on very large trays set in the middle of a rug and the families would use flatbreads to scoop up the food and eat it.  Considering the number of slaves in the palace, I knew that it just wasn’t going to work.  So, instead, I decided to go buffet-style, serving the food on a long table for them to choose from then sit at low tables to eat.

Here, you can see a short excerpt when Teman first sees the food available for the slaves:
The other slaves had moved over to the side obviously set up for meals, and that’s when Teman registered the long table along one wall laden with food. There were several servants in this room as well, stationed in various places, and Teman glanced at his friend again before approaching the table. Plates were stacked on one end and he took one, then pondered the options.

Flatbreads and spreads, fruit and vegetables, eggs and juice and coffee. Teman couldn’t quite wrap his head around the food that was offered to them. They were slaves. And yet they were eating a breakfast that was likely better than anything he’d eaten in a long time.

As the book progresses, I discuss other foods in more detail.  One of Teman’s favorite dishes is lamb and the palace cook is particularly good at making it.  When I did the research into cooking it, I was surprised to discover that I actually cook lamb pretty much the same way that it’s suggest there, too.  My personal lamb recipe is here:

Cut small slits into the lamb and stuff with pieces of garlic, then sprinkle with salt, pepper and the rosemary.  I cook it in a Reynold’s bag and it stays very moist that way.

Yup, it’s that simple.  I’m sure that Cook does something similar for Bathasar and Teman, though I’m not sure exactly what.  I’m going to go with my recipe, though. My family loves it.

I did not discuss other meats in the book, though I imagine freshwater fish from the river and chicken to also be on the menu.  Many Middle Eastern countries do not eat beef, but those are for religious reasons. As I chose to keep religion carefully out of the book, I also didn’t want to include any food restrictions for it.  That said, I didn’t end up needing to worry about the meats, so it worked out. 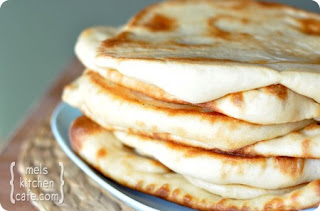 The next major food I knew I had to include was flatbreads.  We hear so much about pitas and while they are very common, there are a number of others, as well.  The one that I thought sounded most interesting is called Naan.  I found a couple of great recipes for both:  pita and naan.
Aside from the breads, I mention hummus and then the desserts.  Oh the desserts.  I was surprised by the variety that were out there, but quickly discovered two of my favorites: baklava and rice pudding. I had certainly not expected to find rice pudding on the list, though why, I’m not sure, but once I did, it was definitely one to include.  I have since tried to make both with… varied success. 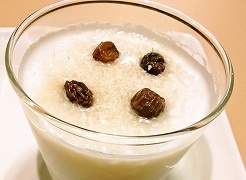 The rice pudding, or roz bel laban, is different than American pudding in that it includes orange blossom water or, in some recipes rose blossom water.  In all the hunting I did, none of the authentic recipes I came across left it out, either.  I have yet to find the water locally, so I haven’t been able to see what the difference in taste is. 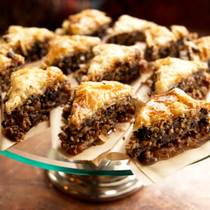 Then, of course, there’s baklava.  Yup, that rich, sweet gooey nutty pastry.  I adore it. In fact, on a recent trip to Pittsburgh, I went out of my way to buy some and bring it home, it was so good.  Baklava (or baklawa) is complicated, involves a lot of layers, but it so very, very worth it, in the end.

As someone who likes food, I couldn’t resist including some of the references to it in Choices.  Teman and Bathasar certainly had their share of fun with it throughout the book. I do hope you’ve enjoyed the glimpse into Neyemen cuisine, as well!

Have you tried any of them? Which would you like to try? Leave a comment for an entry to win a swag bag full of goodies from Choices and to be entered to win a signed, paperback copy of Choices to be awarded at the end of the month.

Thanks again to Cate for being such a wonderful host!

Blurb:
Born and raised a gypsy in the late eleventh century, Teman values freedom over everything. He and his best friend, Jasim, are thieves for hire—until one night they're caught and their precious freedom is revoked. Given the choice between the dungeons or palace pleasure slavery, they become slaves, but Teman vows to escape someday.

Bathasar doesn’t want the throne. He supports his brother instead, which suits their sadistic father, Mukesh. When Teman, the handsome slave Bathasar has secretly been watching, saves his life, Bathasar requests a slave for the first time. Before long, Bathasar and Teman fall in love. But all is not well. One day Mukesh brutalizes Teman before the court, angering the empress of a neighboring nation. To appease her, he then offers her Jasim as a gift, and Teman decides to stay with Bathasar for now—despite the abuse he may suffer.

The peace doesn’t last. Mukesh plans to invade Jasim's new country, and Bathasar must find a way to stop the destruction. But if he succeeds, he'll ascend to the throne and have the power to grant Teman his liberty. Then Teman will surely leave him. What other choice could a gypsy make?
Posted by Unknown at 21:40