Today I am very excited to announce that Lex Chase, a fellow author and friend, is here to talk a little but about her new novella, Pawn Takes Rook. I have had the pleasure of reading it, and let me tell you, brilliant doesn't begin to describe it. This book has it all: action, adventure, humour, romance and even a little bit of angstiness thrown in for good measure! 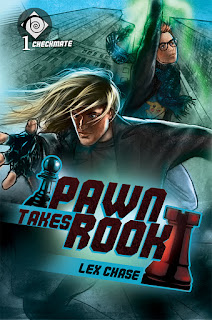 Hello everyone! I’m Lex Chase and it is my honor to be at Cate Ashwood’s blog today. So, thank you Cate. I’m the author of Pawn Takes Rook, the first installment in the Checkmate series. As a superhero romantic comedy, it harkens back to the days of When Harry Met Sally, only with two dudes. One of those two, our protagonist Hogarth Dawson struggles to find his place in the world and keep his monsters of insecurities away with a witty joke. And that’s what I’m here to talk about today. That monster in our minds called Insecurity.

Let me say, Hogarth’s insecurities are like mine only cranked to sixty. Because of him, I can deal with my own inadequacies and realize how I’m make huge fucking mountains out of the most absurd molehills. I think as a writer, we battle our insecurities every day. Sometimes we win, sometimes we lose, but we keep rising to the challenge to make it in this world of a person that gets paid to make stuff up. How awesome is that? Getting paid to make stuff up. Marinate on that.

I look foolish all the time, so with that out of the way that’s one less problem I have. Did you see what I did there? I made a joke. It’s what I do to cover for my complete terror. Bury my own insecurities with humor and self-depreciation and everyone laughs both with me and at me. But aren’t we all like that? Aren’t we all a little uncomfortable or worried that our underwear is hanging out or there’s a booger peeking out our nostril? Fearing failure is like fearing your pants falling off mid-stride in a packed shopping mall during Black Friday. Meaning it’s bound to happen so don’t worry about it much because you’ll get your turn soon enough.

Here’s a thought: If we knew we couldn’t fail, would we even try?

That’s Hogarth’s predicament, after a string of perpetual failures and poor life decisions, (and we can admit taking in Rook was likely a poor decision too.) he decided to do something he decided to scheme his way into being somebody. His plan was guaranteed to fail, but with Rook at his side they both go down together and have a good time doing it.

Hogarth is like the Chumbawumba song “I get knocked down, but I get up again!” He refuses to let any bastard grind him down. If he’s going to have a pity party, it’s going to be on his own terms. Not because Suzie Shumaker pushed him in the mud in the third grade and now he is terrified of all things brown and gets flashbacks when the UPS truck goes by.

I leave you with this: You may be struggling, confused, at a crossroads, petrified of taking the next step… But if you’re going to fail? Fail like a rockstar.

Where To Buy:
http://www.dreamspinnerpress.com/store/product_info.php?products_id=3643
Goodreads:
http://www.goodreads.com/book/show/17404975-pawn-takes-rook


When I first saw Rook, he was cracking the skulls of two goons like eggs into a skillet. I sat there like a freaked out choir boy on my butt between the trash cans lining the alley behind Ted’s TV Tabernacle, gazing in awe and wonder. Rook had hands that could mold steel like Dollar General Play-Doh. He did just that by wadding up Random Thug Number One’s Louisville Slugger into a sadistic snowball and beaned the guy right in the ear. Getting snow in your ear has to be the most excruciating sensation in existence. I can’t imagine getting Kentucky’s finest steel shoved into your noggin.
I don’t remember if I screamed. I likely did. Totally did.
Random Thug Number Two went flying past me in an expert over-the-shoulder throw, his open mouth smacking wetly into the bricks. Broken teeth bounced over the sidewalk. Random Thug Number Three ducked behind the trash cans opposite me. He popped up once in a while, hidden behind the mound of bags and cans. His alligator eyes inched over the unfolding scene from the safe vantage point of the trash bag swamp.
Rook surveyed the alley, making sure he had gotten them all. He snorted a puff of steam with menacing satisfaction at seeing one guy out cold and another on the fast track for full dentures before sixty. Then he came to me. Now, when I say he was smoldering, that’s totally what he was doing. Smoke rose off his tattered trench coat in ethereal coils. Rook’s smoking frame could have been caused by the chill of the oncoming winter and the steam of sweat, but it definitely added to the sexy first impression.
His eyes, oh my Christ on a cracker…. They were not quite blue, not quite green, but like that girl on the National Geographic cover. Those haunting Afghan eyes.
“Are you okay?” Rook rumbled in a perfect antiheroic growl while reaching for my hand. His fingers, broad, callused, and strong, hung there long enough to cue the musical montage in my head. I couldn’t believe it. The one and only Memphis Rook had swaggered into my mugging, ready to bust heads. It was like he planned it, really. Or our universes collided in some awesome poetic way that I can’t think straight at the moment because holy crap, those hands are huge!
That’s when Random Thug Number Three opposite me decided to ruin the amazing moment, popping up like a spring-loaded Halloween skeleton and launched at Rook.
Rook turned in a smooth whoosh of muscle and fabric, and I shrieked as the knife skewered into his gut. He latched onto his killer’s knife hand in surprise.
“Oh God, oh God, oh God!” I screamed. I knew in that infinitesimally dark moment, I was going to die alongside the guy who fought in vain to save my life.
Confused, the thug glared at him, then to his captured wrist, and back again. “W-what are you?” he stammered as courage ran down his pants leg.
Rook released him. The thug held up the knife with the blade crumpled onto itself like a bullet impacting a Kevlar plate. The thug backpedaled, falling backward over a black plastic trash can after slipping on a greasy Five Guys burger wrapper. He screeched, twisting in an about face, and ran like a kid who had spilled orange juice on his dad’s vintage Playboys.
Then Rook turned those Afghan eyes on me, and the musical montage returned. The sleepy, sultry lyrics to “Dream Weaver” crooned in my head along with the accompanying halo of sparkles. His hand, those powerful, thick fingers, reached for mine….
And then he flat fuck fell over in my lap like a Buick dropped from low earth orbit. Steam rose from his body in the not so sexy eau de parfum of burned rubber and gasoline. He lay there, crushing my pancreas while out cold.
And that’s how Memphis Rook fucked up my life.
By coming into it. 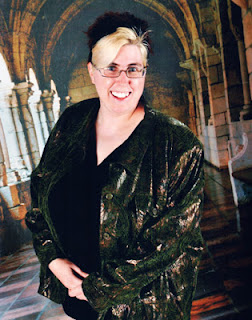 Lex Chase is a journalist by day and a writer by night. Either way you slice it, she makes things up for a living. Her style of storytelling is action, adventure, and a dollop of steamy romance. She loves tales of men who kiss as much as they kick ass. She believes it’s never a party until something explodes in a magnificent fashion, be it a rolling fireball of a car or two guys screaming out their love for one another in the freezing rain.

And her blog at http://lexchase.com.