I can't believe it's actually here. Release Day. It feels like it took forever to arrive, and at the same time was here before I knew it. I am completely over the moon excited and have already had a few people tell me that they bought a copy, which is both extremely thrilling and terrifying at the same time. Being that I live in Canada, it'll still be a little while before I can hold my books in my hands, but it's one more thing to look forward to. There has been so many great things that have happened to me this week, I feel like I should be buying up lottery tickets.

1. My book came out and I became a real, honest to god, published author (duh).

This has been a life-highlight. I will remember this forever. The epicness of this is unbelievable. I am running out of descriptive terms.

I sat on the Dreamspinner Press website refreshing the page over and over until it moved from the "Coming Soon" page to the "New Releases" page, and then I saw this on the side and nearly lost it completely with excitement. (And yes, I did screencap that to commemorate the event. What?) And then when it actually released I may have screamed just a little bit and my mom called to congratulate me. Then my  husband called and we had this conversation:
Me: Hey, do you remember when I first got my contract and I wouldn't shut up about it for weeks and it was really annoying?
Him: Yup.
Me: This is going to be sooooo much worse than that.

2. This amazing review on Mrs. Condit: http://mrsconditreadsbooks.com/index.php/?p=11064  that I was absolutely thrilled to read. Lucky gave it 4 1/2 sweetpeas and I couldn't be happier. (and P.S. there is a giveaway on there too, so many sure you stop by!)

3.  I am attending GRL as a supporting author: http://www.gayromlit.com/author/cate-ashwood
I am really really looking forward to going and have already been incessantly planning in my head. Those six months are going to crawl by, I just know it.

4. For a long time, Will Parkinson was the only person to review Sweets on Goodreads, (and it is a really great review) so for a while I was able to say I had a five-star rating on Goodreads.
You can read it here: http://www.goodreads.com/review/show/535838147 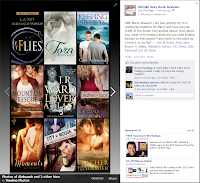 See that in the upper right corner? That is my book. The corner of my book is touching the corner of J.R. Ward's book. Not to mention being in the company of some other very well-know, very talented authors. The caption, which is far too small to read, states that these are some of the books she is excited to read in March.

She is excited to read my book!


6. The week leading up to release day was a stressful one for me. I have gone back to school and March 9th and 10th were final exam days for me. All I wanted to do was spend endless hours on the internet, but instead I was memorizing and studying and generally being a complete basketcase about the whole thing. I was super nervous for them, as I am used to giving the final exams, not taking them, but you know what? I frickin' aced them. Both.

7. My blog tour stars tomorrow (and I am giving away two copies of the e-book)! Here are the stops and topics:


8. I have even more to look forward to, because my birthday is at the end of the month and my family is coming out to celebrate with me. It's going to be the best month ever.


To top it all off, this is the graphic Google used today:

And here, in case you wanted to read it, are some of the links for buying Keeping Sweets.