Jessica Skye Davies has been a writer since her first works were "published" in her grandparents' living room and written in crayon. Today she is a former administrative assistant who is now happily pursuing a degree in social work. She is a lifelong native of Pittsburgh, Pennsylvania where she has been active in the local GLBT community for a number of years. Outside of writing, Jessica has a wide range of interests and hobbies: from Mozart in a music hall to punk in pubs, from Shakespeare to Vonnegut, from nights on the town to afternoons at country farm markets. She enjoys working on both sides of a camera and studying other cultures, languages and history. She loves meeting new people and exploring new places, always open to whatever elements might inspire her next writing project.


How did you get started in writing? What made you decide to submit your first story and what was your experience with that? Who was the first person you told when you got your first contract? What was their reaction? 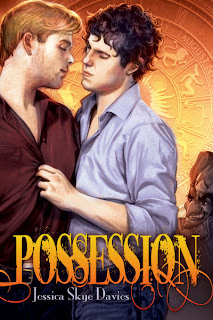 I could probably write a novel on each of these!  I started “writing” when I was about 4 or 5 and I would sit in my grandparents’ living room drawing.  I would take a couple pieces of paper, fold them in half, and draw little picture books.  They usually starred myself or my childhood alter ego, Sally.

I started writing as a real hobby shortly after high school.  I never figured I’d do any more with what I wrote than share with some nice little writers’ groups online.  But then I heard about Dreamspinner, an independent press that actually published m/m fiction and thought, “hey, maybe somebody would be interested in these scribbles.”  What was the worst that could happen, a “no thanks?”  I spent a couple months polishing up Possession, what I thought was my “tightest” story at the time.  It wasn’t too long, didn’t need a whole lot of editing, and I figured it would be a good one to test the waters with.

In all honesty, I think I was easier about submitting the first one and waiting for a response than with the second, Sins of Another (due out this Spring).  Heck, that first one could have been a fluke or the nice publishers just being nice to the adorable little person who thinks she can write (says the back-of-mind voice, while the front-of-mind voice argues that publishers don’t publish things just to be nice!)

I doubt I can recall who I first told about my first contract. I tend to react to major things like first publishing contracts, getting accepted to grad school, etc, with fairly self-contained giddy celebrations. In all likelihood I posted something on Facebook like, “just signed the contract for my first publication” all casual like. And anyway, that was a couple years ago! The second one I received just a few months ago. I was staying with a friend (avid reader and trusted critic) for the weekend when I checked my email on my Droid and got the acceptance. I showed him straight away and got a big hug.

Ask that after Sins is released! As for Possession, the inspiration came from a real-life object. I’d been antiquing with my mother and brother one afternoon in a local neighborhood and saw a colorful, grotesque, cast-iron figure of Punch from the Punch and Judy show. Apparently it was a door holder. It looked like the kind of thing you’d find in a Victorian nursery (think Mary Poppins) except that Punch has the evilest grin and along the bottom, in bas-relief, it says, “DON’T YOU TELL.”  I joked with my brother how funny it would be for someone to buy the thing, display it in their dining room when guests come to eat, and watch how uncomfortable people are with it watching them.  But the thought of the thing wouldn’t leave my mind.  I could find nothing similar to it on any antique sites that would explain that cryptic, and threatening, message.  Finally I decided the only way to exorcise it was to build a story around it.

Inspiration in general – it can be anything.  I might be riding into town on a bus and see someone walking down the street who just looks like they’ve got a backstory.  I might be sitting in a sunny room thinking about winter at the shore.  Could be anything at all.


How do you make the important choices when it comes to writing your stories? Point of View? Voice? Theme? Title?

Generally these things just sort of come with the characters.  I’ve found that when a seed of an idea starts to germinate, going from that first inkling to letting the first details unfold in my mind, that the characters and their overall feeling about life are the first things that I get to know.  Once they start to “talk” to me more about their story (I always see it as their story, not mine), I find out who’s doing most of the telling.  That gives me POV and voice.  Theme I usually find in those first “feelings about their lives.”

Title, however, is trickier.  I usually have to come up with that all on my own!  What works for me is to come up with a key word or two that applies to the story.  For Possession, well that was obvious.  A possessed possession.  Frankly, my titles aren’t usually deep and layered.  There’s nothing in Possession about a dangerously jealous boyfriend or anything (though Tyler might not feel quite that way all the time).  The original working title for Sins of Another was Innocent Wisdom, the idea being the juxtaposition between innocence and wisdom and the question of how someone who is innocent (blameless) can acquire such wisdom - which I decided was tacky.  I went with a line from the story instead, when a “mysterious benefactor” tells Padrig, the main character, “There comes a time when one has seen such suffering one begins to understand, in this world, even the innocent may be forced to bear the sins of another.”

Definitely fictional.  In fact, I go to lengths to avoid letting my characters look or act like people I know.  In Sins, one of the main characters has the same first name as my brother, though with a different spelling.  I asked the character several times about trying on another name but he was pretty firm about his name.  I told my brother he was just going to have to change his instead.

Who is most like me?  Maybe Kevin from Possession, I think we’re both pretty level-headed, willing to see different sides to a situation, and we both have a love of autumnal foods.

Being published, full stop.  Never would have imagined it.


If you could co-author a book with any other writer, who would it be?

Oscar Wilde.  Who cares about the writing, I just want to have tea once a week!

Isherwood’s A Single Man.  I saw Tom Ford’s adaptation before I read it, so that might color my thinking, as it were, but probably not.  I think it’s one of Isherwood’s best, his masterpiece, in my opinion.  It’s a beautiful story about loss and trying to move on in one’s life and how these little moments, little scenes which make up a day can be so full.

Reading at the moment?  Last semester in my degree program - mostly research articles!

Each morning (except Sundays) I rise at 6:00 AM to enjoy the best part of the day with a quiet cup of tea.  By 7:00 AM I am at my writing desk, a tidy, cozy little nook tucked away in a quiet part of the house, surrounded by books with no outside-world distractions.  Every day I endeavor to write at least 1000 words by noon, when I break for lunch.  Afterward, if my writing goals for the day have been attained, I turn my attention to correspondences of an assorted variety.  With those are satisfied, I sit down to my course work until supper time.  I spend the remainder of the evening beside the hearth with a modest glass of Grand Marnier, reading for enjoyment, until 10:00 bedtime.  I allot one afternoon a week for outings which cannot be accomplished on Sundays.

As a sideline, I also sell bridges.

I’m a movie lover.  Last semester I tried to spend one afternoon a week just watching movies.  It’s totally selfish and probably an awful use of time, but one thing I’ve come to recognize is that sometimes you need to do things like that.  I do other, more productive sorts of self-care, I’ve taken dance classes, I go to the gym, things like that, but mindless escapism has its place too!

This Spring, as mentioned, I have my first full-length novel due out with Dreamspinner Press.  Sins of Another is probably best described as dark but hopeful.  It’s the story of Padrig, a young man who finds himself involuntarily involved in sex work.  After being rescued he learns that he is HIV positive.  Padrig faces a choice between giving up and standing up, but he doesn’t have to go it alone.

What’s in development after that?  A few things here and there.  We’ll see how they play out.