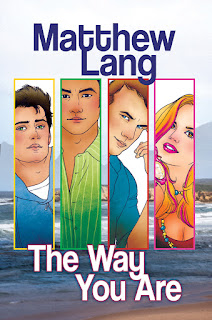 Matthew Lang writes behind a desk, in the park, on the tram and sometimes backstage at amateur theatre productions. He has been known to sing and dance in public, analyse the plots of movies and TV shows, and is a confessed Masterchef addict. Over the years he has dabbled in marketing, advertising, event management and the sale of light fittings, but his first love is and has always been that of the written word and is rarely too far from a good book. He likes his men hot and spunky, his mysteries fantastical, his fantasies real and his vampires to combust when exposed to sunlight. Other than that he’s pretty normal. One day we may even take him out of the straight jacket.

I’ve always written. I wrote stories when I read stories as a child—blatant plagiarisms of whatever picturebook I borrowed from the library usually, but still stories—I created non-fiction stories that I made into presentations from the new-fangled encylopaedias that came on CD-ROMs before the invention Wikipedia and in one case I made turned out a tiny and badly bound book for a school project. I think it had six pages. I wrote stories when I discovered how to take screenshots in video games.

My first published story, The Secret of Talmor Manor was conceived inside a video game—bonus points if you can guess which one. Actually, tell you what, I’ll give free digital copy of it to anyone who correctly guesses the game before Cate’s next blog post goes up. First guess is the only one that counts though people—contact me at my website to enter! Where was I? Oh yes, the story eventually turned into a novel manuscript when I needed something to work on for National Novel Writing Month. I lost a corporate job I didn’t really want just after I finished the draft—and incidentally got a bit of a backdoor apology from HR for my manager and her behaviour. In retrospect I probably had grounds for an unlawful dismissal case against that particular company, but I’m just happy to be out of it to be honest. In any case, I took up a job in event and festival management—I went from crew to site manager basically—and I spent many evenings sitting on a rooftop by the beach with a small light while a movie played on an inflatable screen for anywhere between twenty and one hundred and fifty people while I edited and redrafted my work.

I took a position in Sydney working on an open air ice rink—day one on the job consisted of improvising a ticketing system so the managers could work out how many tickets they sold and how many people they were letting on the ice at one time—and I was sub-letting a room in an apartment that literally overlooked Bondi Beach when I received my acceptance letter. I’d been asked to redraft the work, which I did, and the requisite ‘consideration time’ had passed, and I sent a polite email in enquiry. You have to remember that I’m in Australia, and my publishers are in America, so I had no idea when they’d see it, or how long it would take to get a response. I got one that evening, at about eleven o’clock at night. Actually, it was there earlier, I just didn’t get to check my email until then.

I read the offer. And I screamed. And then I woke up my temporary housemate who’d gone to bed about half an hour before, and we squeed and bounced about in excitement. She’s working on launching a fashion label, and she slept in her panties. So there she was, tanned skin, bleached blonde pixie cut hair, covering her nipples with one hand and jumping up and down in excitement. It’s an experience I’m sure nine in ten men would kill to have seen, but instead it was me there. Ah, memories.

Where doesn’t it come from? I get ideas everywhere. From things I read, things I hear, people I talk to, social media, gaming, little silly challenges people give to me—hey can you work in death by can-opener into your story? What about a penguin? Everything I experience seemed to go in this simmering melting pot of crazy that is my brain and eventually out pops a story. Sometimes they’re good, sometimes they’re terrible, some never see the light of day. The best ones remain and grow and evolve and eventually demand to be written. And eventually I will write them all. I think. Or I’ll die. That’s always a possibility. Can-openers might feature. 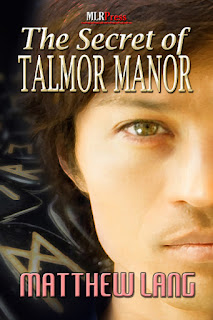 I write third person close. I find it has all the benefits of first person narrative without the drawbacks. I also write point of view from the protagonist, or protagonist and his lover, given the genre in which I publish. No more than two points of view. I do that very deliberately because I want a reader’s view point into my story to be constrained by perspective. I want to be able to surprise and delight with the unexpected, evoke the excitement of exploring the unknown and the terror of a villain who is similarly unknown in both identity and motive. Or just big and scary. Maybe it’s my love of gaming, but I feel there’s nothing worse than knowing everything about a villain within the first three chapters of the book and having to wait twenty three more for them to get their comeuppance—assuming they even do.

Themes in my work spring from the story idea. For The Secret of Talmor Manor, I wanted to write a story about ghosts trapped in a British Manor, which lead me to ask why they were there, how did they relate to my protagonist and who wanted to keep them trapped in undeath. For The Way You Are, I wanted to explore friendships between gay and straight men and the very real experience of growing up gay in places that do not fall wholly within the liberal bubbles that I know that I for one prefer to live in. For my current novel draft, working title Prophecy, I wanted to find out how a modern gay man would react to the traditional dragon slaying fantasy quest. Typically, I find the story I want to tell and the theme’s right there.

Titles on the other hand have a tendency to be chosen out of desperation rather than anything else. I consider myself quite bad at title creation, and I usually pick something and go with it so I’m not stressing about it—and more often than not it ends up getting used. Maybe I just need to trust myself more.

Oh, they’re all fictional. They have to be. Because I often find my theme before my characters, my characters all have a role to play inside the stories I tell, so some parts of their identities are necessarily fixed before their personality quirks. In The Secret of Talmor Manor, Jake was deliberately an academic and needed some familiarity with words. Nate needed an innocence towards the modern world and had to be aristocratically British. In The Way You Are, Leon needed to be shy, uncertain and self-effacing in order to give him believability and room to grow, whereas Rook needed to have a boy-next-door likability to make the story dynamics work. Warrick needed to have a reservedness born of societal caution. I think all of them sample from me in some way, they can’t not. All of them sample from people I meet, again, they can’t not. I don’t think any of them are me, or are someone else though. I’ve yet to write a story that needs a person just like me in it. That probably answers the next part of the question too...

I met a fan recently and got told that The Secret of Talmor Manor was the first novel length work he’d ever read, and it continued to be his favourite novel despite the novels he’s read since. In essence, I am partially responsible for introducing a person to long narrative works. It’s just one person, true, but it’s nice that I was able to help with that.

Terry Pratchett or Neil Gaiman. Or both. I think it would be an education in and of itself.

Everything I know I learned from TV. It’s a great introduction to philosophical thinking for anyone who hasn’t read Sophie’s World, or found it a bit hard to understand. In terms of reading I’m currently between books and I need to go shopping once I’ve sorted out little things like getting a new housemate and fixing my Xbox360. I’m trying to work out what to buy and I’m leaning towards Kim Fielding’s Brute, but there’s a lot of other authors I really want to read.

Finishing. I always want to edit, even when I don’t want to edit because I’m sick of editing and can’t see the novel for the words. Also, sometimes I get scared because the novel seems perfect in my head even with the massive gaps in the narrative, and I’m worried that if I write something less than perfect I’m an abject failure. Then, after a bout of procrasturbation, I write it anyway, and then go back and edit the hell out of it. Did I mention I have trouble with finishi--


What is a typical working day like for you? Where do you write? Do you wait for inspiration? Do you set certain writing goals? Are there any specific tools you use to help you write?

I don’t what a typical working day is like for me. I’ll let you know when I have one. In terms of when I write, I just write. I don’t wait for inspiration, because that always leaves about a third of the way into a draft, and I try not to set specific goals because something always interrupts. Sometimes I get more done, sometimes I get less done, but I try to work consistently and get something done at least four days a week.


What is your greatest guilty pleasure (literary or otherwise)?

Amazing fantastic sex. Oh wait, you said guilty pleasure. Probably home-made ice cream. It’s not as bad as shop bought ice cream, but there’s still a fair amount of sugar and fat in there, and I’ve yet to make a sorbet I loved as much as the ice cream.


And…last but not least: What are you working on now and what can we expect to see from you in the coming year?

Well, as I mentioned, I’m working on a fantasy narrative tentatively titled Prophecy, and here’s the raw, as yet unedited opening. Warning, this opening is liable to change without notice.