Andrea Speed writes way too much. She is the Editor In Chief of CxPulp.com, where she reviews comics as well as movies and occasionally interviews comic creators. She also has a serial fiction blog where she writes even more, and she occasionally reviews books for Joe Bob Briggs's site. She might be willing to review you, if you ask nicely enough, but really she should knock it off while she's ahead. 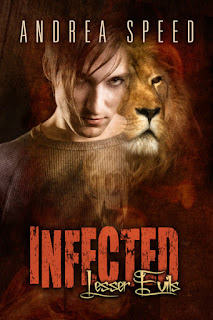 I’ve pretty much always written, which is a cop out answer, but my grandmother was a writer. Mostly a non-published one, but I always thought of being a writer as something viable. I loved books, and was kind of surprised to discover not everyone did. But how could you not?
I was writing serial fiction for a website when a fan emailed me and told me I should really submit my work. I’d never seriously considered it, because I didn’t think I was all that good. But they recommended Dreamspinner Press, so I figured what the hell, and submitted a story. And they bought it, so listen to your fans, writers.
I think the first person I told was my mother, who was thrilled for me.

There’s a bargain bin in most stores where you can find lots of stuff. Ha ha! Really, I don’t know where inspiration comes from, and if anyone did, they’d have bottled it and started selling it by now. Inspiration is where you find it. Sometimes it can be from a Science News article, or from a song, or a nightmare.  Short of that, start rummaging through the bargain bins.

Titles are the hardest, and I usually come up with them last. As for the stories, when I have an idea, I usually have an opening line or scene in mind, and that tells me all I need to know about the story moving forward. That’s a terrible answer, isn’t it?

They’re mostly fictional, but every now and then I’ll take something from someone I’ve known or encountered. As for characters most like me …. All of them, and none of them. I think there’s a bit of me in most of my characters. If I can’t get away with that, I’ll say Roan, because he and I have similar tastes in music and comedy.

Aleksandr Voinov! Mainly because I want to write a science fiction story with him. I loved Incursion.

It’s a short story collection by Jim Shepard, titled Love and Hydrogen. It is amazing, and I think he’s probably one of the best writers working that only a handful of people had ever heard of.
As for what I’m reading right now, Newton’s Wake by Ken MacLeod. Lovely bit of science fiction.

Besides coming up with a title? Sometimes endings can be really hard, especially if it really is the end of everything. There’s a true finality to it, like the end of a relationship. Weird, I know, but I never claimed not to be weird.

I set no schedule, because the universe has a good, hearty laugh when I do. But I do write every day, for as long as I can. I just write in my bedroom/office, because, for space reasons, I had to combine the two. No special tools.

Hmm. I don’t really believe in guilty pleasures, because, if you enjoy it, why feel guilty? But as answers goes, that’s pretty crappy, isn’t it? Do stupid movies count. I like bad films, like old creature features and such. MST3K movies, basically, with or without MST3K. They can be quite enjoyable, but never as the creator intended them to be. Although, word of warning: never watch  a Coleman Francis movie without the MST3K guys guiding you through it. He is a worse filmmaker than Ed Wood. At least Ed Wood had enthusiasm. (No talent, but enthusiasm.) Francis is utterly joyless, and his films could  turn you suicidal.

Wow, I'm working on so many things I'm a bit of a basket case. But coming out this year is the next in the Infected saga, Infected: Undertow, due in June or July. Haven't even started editing it yet, but I can give you a little tease ...


By the way people were scrambling about in the otherwise sedate lobby, Dylan knew something had gone horribly wrong. He just bet Roan had something to do with it.


He was right. He took the elevator up to Roan’s floor, and was almost immediately greeted by a metal security door, where Rosenberg and several butch orderlies, some with drug guns that looked distressingly like sniper rifles, were waiting as if preparing for a siege. Rosenberg looked at him and opened her mouth to speak, only to be silenced by an angry roar, loud enough that she winced and most of the orderlies cringed. The two biggest orderlies were peering through bulletproof glass windows into the IU - also known as the “infected unit” - and one of them muttered in Spanish, “I didn’t sign up for this shit.”


Ha ha! Yes, I'm ending it there. Also out this year, the new Josh of the Damned Trilogy (Name not yet determined; date to be announced). Here's a tease of that.


“What the hell is that?” Doug interrupted, pointing out the windshield.


Josh actually had to focus, because he honestly didn't see anything, because the streetlights had gone out and it was almost perfectly pitch black outside. Except ... no, that wasn't right. There was an odd gleam in the sky, and once his eyes adjusted, Josh realized there was something dark and humongous in the road, and it was vaguely shiny. Wet, maybe? “What the hell is that?” Josh wondered aloud, squinting like it would give him a better look at the thing. It didn't.


“It looks like King Kong just took a dump in the middle of the road.”


Oh yes, ending on a giant poop reference! Because it wouldn't be me if I didn't.