Devon McCormack is here today to talk about Clipped, out from Wilde City Press! 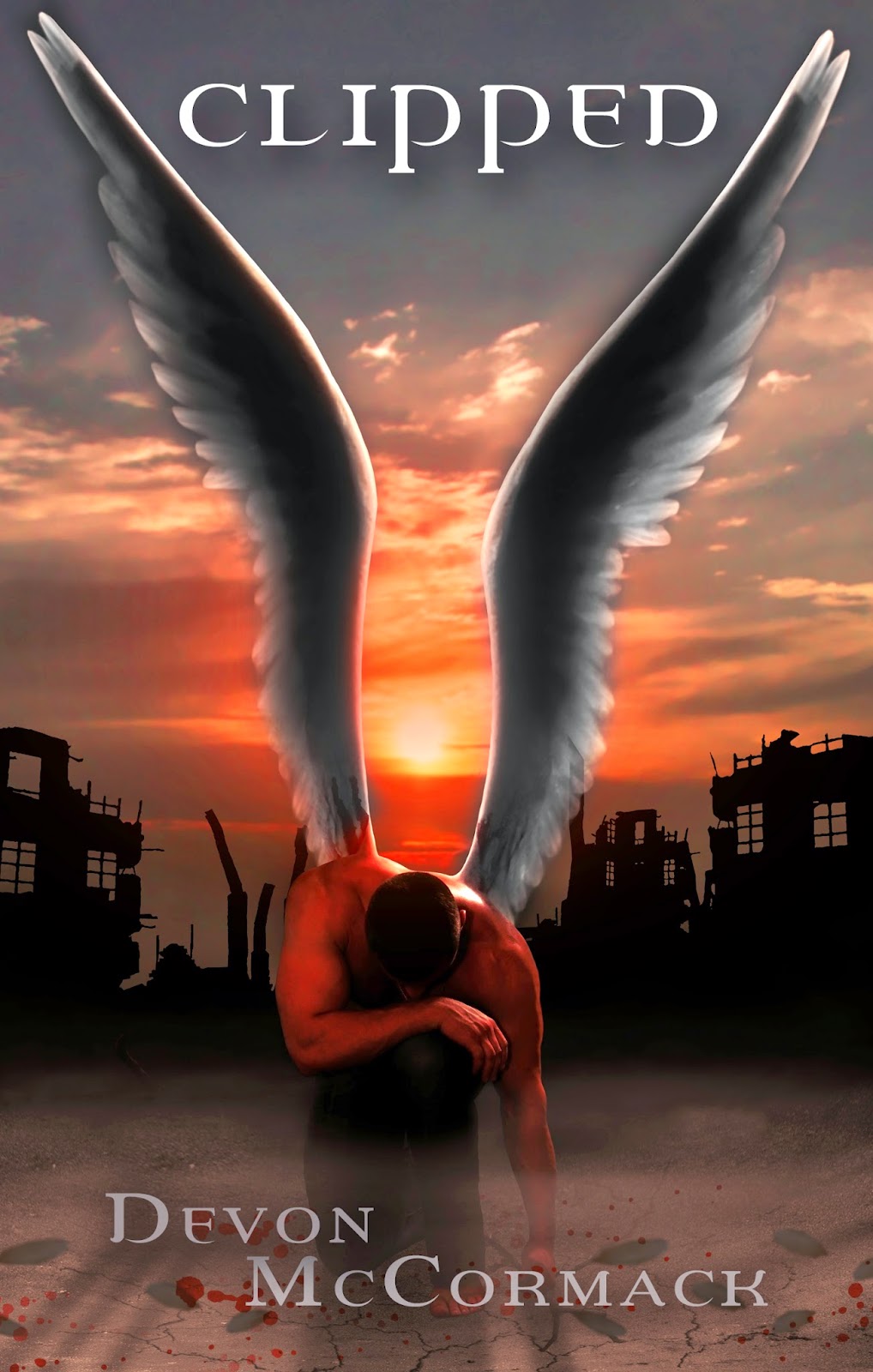 Though mortals have been convinced that God cares about their souls, nothing could be further from the truth. He created the world as a gift for his lover, Satan. But when Satan left him, he decided to end what he saw as his most grotesque creation.

Satan and his army of demons are man's only hope...

The demon Kinzer and his lover, Janka, have been sent by Satan to spy on The Raze, a gang of rogue demons who are working with God to bring about Armageddon. When someone exposes their true allegiances, The Raze clips Kinzer's wings and murders Janka. Kinzer manages to escape. He tracks down Satan's allies to warn them about a mole in their midst when he learns that they've located the Antichrist—a powerful weapon that could prevent the apocalypse. Now, he's on a mission to protect the Antichrist and avenge his lover’s death.

If I was writing an old-school craigslist personal, I'd say (appropriately in code): fit masc wm ddf lookin 4 same. 28yo. Of course, who's honest with their craigslist personal ads? And who the hell uses craigslist these days? Please. That's what grindr is for. 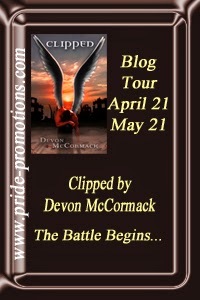 Dedrus scanned Kinzer’s body, admiring his massive biceps, his brown eyes, and his black waves of hair. Even with the wounds and tears that still tainted his face, he was beautiful. Dedrus wanted to press him back against the cushion, rip off his clothes, and provide him with the ease he deserved. But no! He was just wanting it for himself, and he was pretending that it was to serve Kinzer’s pain.

“I loved him so much.” The words cracked through Kinzer’s lips. His cheeks and forehead shivered. Tears filled his eyes. “I know we had so much time, but it wasn’t enough.”

The sting in Dedrus’s chest intensified. His cheeks flashed red as anger washed over him—anger that he loathed because it made him feel like a terrible, selfish creature.

He set his hand on Kinzer’s back, his palm stroking softly across the blue fabric of his polo. He wanted to say, “You’ll find love again.” He couldn’t, because he knew he’d really be saying, “Please find love in me.” He thought of saying, “Everything will be alright.” No. He couldn’t make that kind of promise. “It’ll take time,” felt appropriate, and yet, as an immortal, Dedrus never perceived time as a generous gift as much as a twisted, agonizing punishment.

“I wish I could think of something right to say about this,” Dedrus said, “but I can’t. I know how much you loved him, and I know how much he loved you, and I can’t imagine how hard this is going to be for you. But I’m here. As your friend. I don’t know if that means much, but I know the feeling of having something so perfect and wonderful torn from you.”

Kinzer’s gaze met his. His eyes were sad.

Does he know what I’m talking about?

“Of course,” he lied. “I’m just being overdramatic.”

“I figured as much. Considering where you work, I'm sure you get a lot of offers.”

It was true, but not the way Kinzer was suggesting. There were nights when Treycore dragged some pathetic mortal back to ease Dedrus’s pain. Those nights were the loneliest. Though he could bring himself to climax, it was an empty relief that just stirred the cruel memories of those moments filled with so much more.

Dedrus hugged him again. “Let’s get to bed,” he said. “You need some sleep.”


“We have plenty to sort through tomorrow. You can have my room. I’ll just sleep here.”

Kinzer picked the sword up off his lap and stood. He reached his hand out. “Come on. It won’t be the first time we’ve shared a bed.”

The upward curl of his lip let Dedrus know that Kinzer was more than interested.

Dedrus’s dick swelled. “I don’t think I can.” He wanted Kinzer so bad, and if he put himself in that position, he was sure that he wouldn’t be able to resist making a move—especially if Kinzer initiated something.

“I'd rather not disrespect you like that,” Dedrus said.

Kinzer’s hand fell, bouncing against his jeans. His head drooped.

“Then I guess I’ll see you tomorrow.”

Don’t tease me with a taste!


“Up the stairs, first room on the right.”

Kinzer walked up the stairs, headed down the hall, and slipped into Dedrus’s bedroom.

Dedrus had hoped that Kinzer’s exit would provide some relief.

He ached for him. His thoughts dwelled on Kinzer’s lips tickling his nipples, his gaze appreciating his body, his tongue delighting in his body’s grooves. He wanted to run upstairs and throw his arms around him, to hold him for the night, and tell him that no matter what happened he’d be there for him. He wanted more than that, but he wouldn’t press his friend. He wouldn’t dare cross that line…even if Kinzer insisted.

Spreading his limbs across the couch, he rested his head on a lace pillow at the end and rolled so that he was facing the cushions.

He closed his eyes.

A few moments passed before something pressed against his ass.

He flipped over and hopped to his feet, ready for a fight.

Kinzer stood before him, holding his hands out, as if showing a cop that he was unarmed. “Whoa, cowboy. Chill the fuck out.”

“Sorry.” Every hair on Dedrus’s immortal body stood on end. “You freaked the shit out of me. Did you need something? Another cover? Pillows?”

Kinzer wiggled his thumb behind the waistband in Dedrus’s khakis.

“Yeah. I need something.” He pulled their pelvises together.

His hot breath rushed across Dedrus’s lips, settling in the bristles across his cheeks. The warmth combined with a rush of blood that surged to his face and made him feel like his cheeks were about to catch on fire.

Kinzer pressed his lips against Dedrus’s.

Amidst the creases in Kinzer’s lips, Dedrus felt the smooth, subtle dip where Kinzer’s cut was healing.

He trailed his palm over the rough fabric of Kinzer’s polo. As he reached the smooth flesh of his neck, curly black hairs pricked his fingertips.

Kinzer opened his mouth wide. Dedrus eagerly reciprocated, tilting his head and allowing their lips to seal together. A swirling sensation gathered at the back of his spine and rushed to the crown of his skull.

Guilt nagged at his thoughts. He couldn’t do this. Kinzer didn’t really want him. He was just vulnerable and ached for a physical distraction from his grief. It would be wrong to take advantage while he was still recovering from Janka’s death.

He wanted Kinzer so bad, but not like that. Pressing his hand against the dip between the bulbous, jagged pecs before him, he broke their sealed kiss.

“What?” Kinzer rested his hands on either of Dedrus’s hips.

“This wouldn’t be right. I don’t want to disrespect you.”

Kinzer wrapped both arms around Dedrus. Spinning them around, he pushed Dedrus back against a painting that hung from the wall.

Kinzer’s eyes glistened with that gleam—the one that was so familiar to Dedrus.

Dedrus couldn’t control himself. His lips returned to their passionate embrace. His fingers found their way under Kinzer’s shirt, feeling about fervently, savoring the dips in his torso.