Please help me welcome Tinnean to my blog today to give us a little glimpse into the mind of Mark Vincent as well as an excerpt! 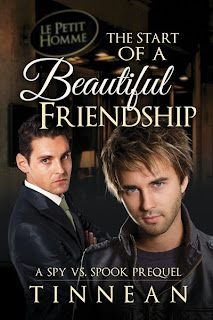 It’s 1996, and Mark Vincent, senior special agent of the Washington Bureau of Intelligence and Security, has been assigned the task of assassinating the head of a terrorist organization in Europe. When the mission goes south and he’s ordered to take a vacation, he goes to Paris, and in a little bar called Le Petit Homme, he sees a man who intrigues him. However, like ships passing in the night, they go their separate ways, only to meet again the following morning, where, over breakfast, the man introduces himself as Louis.
Is it too much of a coincidence? Perhaps, perhaps not, but Mark is intrigued and, unable to resist, he gives his name as Rick. A comment of Louis’s leads Mark to assume Louis hustles for a living, so Mark decides to “rent” him for the week. Unbeknownst to Mark, Louis has his own reasons for going along with the charade, which leads to… the start of a beautiful friendship.


On January 7, 1996, it started snowing in New York, and it snowed like a son of a bitch for the next two days. Trust me on this… I was there at the time.
Since I was in a hospital room at Good Sam in West Islip, I had my cell phone in etiquette mode, and when it vibrated in my pocket, I knew it was a message from work. No one else called this number. I took it out and checked the text message.
Yep, it was from the WBIS, the Washington Bureau of Intelligence and Security.
I grinned at the man lying in the bed, determined not to let him see how concerned I was about his condition. He was hooked up to more machines than a body should have to be.
My old lady was a Grade A lush who had a tendency to hit the bars and bring home whoever caught her fancy. The guy would stay with us for a day, a week, a month, maybe, and then she’d boot him out. For some reason those men always treated me well and stayed in touch. One was a scoutmaster who taught me French, as well as how to fence. Another was a Portuguese fisherman who showed me the best way to scale a fish, how to handle myself in a knife fight, and how to crochet. According to Tio Ze, a man didn’t have to be defined by labels.
The man in the bed, an expat Brit, not only introduced me to various methods of self-defense, but he’d seen to it that I had a decent education, even after he left. He got me out of the shithole that had been home from the time I was six and sent me to a military academy on Long Island. His name was Bert Greenley, but I’d always called him Uncle Bert, or UB for short. When I’d learned he had cancer and shit insurance, I’d made sure he had the best doctors and the most up-to-date treatment, even though I knew eventually it would just be palliative.
“I have to take this call, UB.”
“Go ahead, son,” he rasped. Lately, his British accent had become more noticeable, possibly due to his illness. I wondered if his accent had anything to do with my old lady’s attraction to him. Now that I thought of it, most of her men weren’t from the States to begin with.
I rested my hand on his arm gently. My own father had disappeared from my life when I was about five. Four? Time had a tendency to blur.
“I’ll be right back.” I strode out of the room, took the stairs down to the lobby, and went out to the parking lot, which was how I discovered all the snow. “Fuck.”
This hadn’t been in the forecast when I’d flown up to Long Island a couple of days earlier, so I hadn’t brought along gloves or boots, and the bomber jacket I wore was more suitable for higher temps.
The snow was already halfway to my knees, but this wasn’t a phone call I could make in a public area. I worked for an agency no one outside the intelligence community knew existed, and those inside the intelligence community wished didn’t exist.
I trudged to my rental, got in, and turned on the ignition so I could get the heater going and thaw my toes. Goddamn, it was cold! I rubbed my hands together, blew on my fingers, and hit one on speed dial.
“Mr. Wallace’s office.” I wasn’t surprised both he and his secretary were in on a Sunday. If I hadn’t had to see UB, I’d have been in as well.
“It’s Vincent.”
“One moment. He’s been expecting your call.”
In less than a moment, The Boss—and yeah, that was with caps—came on the line.
“I have a job for you, Vincent.”
“Yes, sir.” This wasn’t an ideal time, but nothing, not even the man in the hospital bed, who I cared about, came before the job.


You can buy The Start of a Beautiful Friendship from Dreamspinner Press: http://www.dreamspinnerpress.com/store/index.php?cPath=55_386