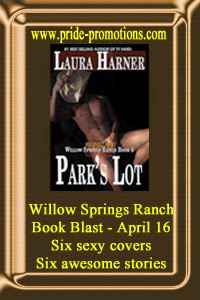 Laura Harner is here today for her Willow Springs Ranch series. I haven't read the series yet, but after hearing all the wonderful things people have said about these books, they are at the top of the list on my kindle. There are 5 (and a half) books in the series from Hot Corner Press and Laura did the covers herself. Multitalented!

Make sure after you read through the blurbs and drool over the covers, you scroll right to the bottom to enter for a chance to win one of FIVE $20 gift certificates to Amazon!

Tyler has used Don’t Ask, Don’t Tell as a shield against the truth since he was seventeen. Cut loose from his Navy career and mourning his mentor’s death, Ty must come to terms with his desire for another man, even while he fights to keep his PTSD from pulling him under. Rancher Cass Cartwright’s relationships never last more than a few hours, and that’s just the way he likes it. Now he's done the one thing he swore never to do: fallen in love. Can Cass convince Ty to let go of his past or will sabotage at the ranch kill their love before it has a chance to grow?

Sheriff Holden Titus had organized his fresh start down to the last detail. Except for the part about the bomb that blew his plans all to hell. Now he’s running out of time, without a job, without a home, and struggling to get back on his feet. Literally.
Despite the impolite rejection, Drew knows he didn’t have the wrong impression months ago when he asked the sheriff to dance, but he never expected to have Holden’s life in his hands. Literally.
Thanks to some meddlesome matchmaking, the two men are now temporary housemates at the Willow Springs Ranch and Drew is determined to help Holden heal, both physically and emotionally. Even if it means he has to drag the other man kicking and screaming to physical therapy…and out of the closet. In fact, that might be kind of fun.
The problem is, Holden doesn’t consider himself in the closet…but not all secrets are created equal.

Officer Chance Carter is pretty sure he’d still enjoy being on either end of a good ass reaming—just not the one from his supervisor that lands him on an involuntary extended vacation. Another holiday season with nothing to do except visit an old friend.
Former hospital corpsman Bryan Mitchell doesn’t feel less than honorable, but that’s what his discharge paperwork states. Now he's down and out in Kingman, Arizona until the charity of a stranger lands him a temporary job for the holidays.
When two federal employees go missing during a highly controversial wild horse roundup, the two Willow Springs Ranch newcomers are drafted to help in the search, but if rumors of a local anti-government militia are true, Chance and Bryan may be in serious trouble—and from something far more dangerous than their mutual attraction.

Ty brushed his hands on the long white apron and moved to the island counter to add more frosting to the piping bag. Cake decorating had never been his favorite chef duty, but like many cooks in the Navy, he had plenty of experience. He took another sip of coffee then began the final step of piping the white border around the edge of the top layer. He would add the already prepared red roses, last. As peace offerings went, a chocolate three-layer cake with buttercream icing wasn’t much, but Cass would forgive him. Eventually.
Today should have been their wedding day, but Ty had put a stop to all the foolishness weeks ago. For fuck’s sake, Arizona didn’t even have gay marriage. The gathering of friends for a commitment ceremony just seemed…stupid. Besides, Cass had just been caught up in the events surrounding Chance and Bryan’s rescue when he’d proposed. The truth of their relationship had been plain as day when Cass tried to take over the conversation after Bryan had been rescued. The words still echoed in his head.
“It’s my ranch…my decision…" Cass was boss and Ty the cook. Point taken. Ty wasn’t even bitter. Much. Cass was right, this was his ranch and Ty had usurped his authority—but goddamn it! No one here was better than Ty when it came to running a covert mission. Cass should have respected him enough…trusted him enough…

For Chad Ollom, landing on the Willow Springs Ranch after his teaching career crashed and burned last year was a lesson in irony, considering he’d sworn off all things related to horses and cowboys after a near fatal fall as a child. Now with a new mission in life, Chad plans to bring critically ill children to the ranch for a special celebration.
Aging rodeo cowboy Jesse Duran lives life eight seconds at a time, and whether it’s broncos or men, it’s always been get on and get off before anyone gets hurt. When he’s required to take a break from the circuit and ends up on the WSR, the enticing ass of a stand-offish teacher turned contractor might just be enough challenge to keep him entertained for a week or two.
As attraction flares, personal boundaries start to crumble, and the lines between seducer and seduced begin to blur. When the series of on-going attacks against the WSR moves from sabotage to arson, Jesse steps up to help, but when Chad is forced to return to his past to face charges, the men of the WSR want to know if Jesse will stick or leave Chad hanging.

When vegan, peace-loving, social do-gooder Park Williams stumbles across the half-dead cattle rancher who has been sabotaging the Willow Springs Ranch in the name of a homophobic militia group…there’s only one thing to do. Save his life, then share his tent. Waking to find the man’s dick pressed against his ass is just a bonus.
Tanner Triplett is in trouble. Not the your-brother-is-a-sociopathic-murderer-and-you’re-his-next-victim sort of trouble. Not even the your-father-is-trying-to-overthrow-the-federal-government-and-you’re-going-to-jail-for-helping kind of trouble. No…this is the sort of trouble that comes when you wake up with stranger’s dick in your hand. Holy fuck. How is he going to get out of this?
A sudden need to run for their lives ought to do it.
Determined to make amends, Tanner leads Park to the relative safety of the WSR, where the biggest danger should be from gun-wielding cowboys seeking revenge. Tanner hadn’t counted on sharing a room with the exotically beautiful Park or the danger to his heart when the carefully erected walls protecting his secret come tumbling down.

Raised in California, Laura likes it hot, which explains why she ended up in Arizona via such diverse places as Japan, Maine, and Florida, and many more places in between. After retiring from the US Navy, she found a niche working for land management agencies, including the National Park Service and the Bureau of Land Management. Though she has held many jobs around the world, her favorite was working and living in Grand Canyon National Park. Working (and eating) in New Orleans was a close second. You will find many of her books are set against the rich backdrops provided by coastal Louisiana and northern Arizona.

When asked how she started writing, Laura tells of waking on Boxing Day a few years ago, with a woman named Elena MacFarland yammering in her dreams, demanding her story be told. Despite never attempting to write fiction before that morning, Laura ignored all of the holiday visitors and the Highland Destiny series was born. She doesn’t believe it was a coincidence that the great grandmother who died when Laura was just a baby was named Elena MacFarland. Destiny does play a hand.