Joy Lynn Fielding is here today to share a bit about her book, Shifting Sands, including an excerpt. The book is available from Siren Publishing. Make sure you enter the Rafflecopter giveaway at the bottom of the page for a chance to win a $10 gift certificate for Amazon! 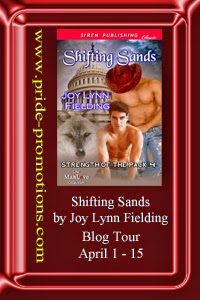 The visit to Elk Ridge is just another assignment for Tom Barrington. Then he encounters Bryce Reynolds, a generous, warm-hearted cowboy who has the easiest smile he’s ever seen. It doesn’t take long for Tom to break all his rules and end up in Bryce’s bed.

Bryce Reynolds believes there’s no such thing as a hot politician, right up until he meets Tom Barrington. Tall, dark, and principled, Tom overturns all of Bryce’s prejudices, and Bryce starts to forget that he doesn’t do serious and he doesn’t do commitment. As Bryce and Tom struggle to make sense of what’s happening between them, they’re drawn into a political battle—one which could affect the future of every shifter. And when long-buried secrets start coming to light, things turn deadly. Nothing will ever be the same again for the Elk Ridge pack.


Here's an excerpt from Shifting Sands:

Bryce pushed open the door, prepared for another snotty pen pusher like Taylor Cufflinks the Third, or whatever his stupid name had been. Because of that, it took him a moment to process that he was seeing what he thought he was seeing and that he hadn’t found himself in the middle of a really good dream. Except if it was a dream, presumably this guy would already be naked rather than pouring himself a cup of coffee while dressed in a crisp white shirt, open at the neck, and gray slacks that should have been illegal given the way they clung to the curves of a frankly spectacular ass.

If Tom Barrington was a pen pusher, it was a pretty heavy pen he pushed on a regular basis because those were definite muscles betrayed by the fit of his shirt. His hair was dark and just a little wavy, his cheekbones were sharply defined beneath flawless skin, and there was the suspicion of a five-o’clock shadow on his jaw, which somehow emphasized just how strong that jawline was.

Bryce was still staring when Tom looked up and gestured with the mug he was holding. “Hope you don’t mind,” he said, then paused.

Bryce was aware that he was being studied in return and stood a little taller, opening himself up for inspection by rich brown eyes. It seemed Tom liked what he saw, because he looked for longer than was strictly polite. Bryce grinned at him when his eyes returned to Bryce’s face, and Tom suddenly looked away, biting his lip slightly as if he’d been caught doing something he shouldn’t have been. Even that didn’t stop him sending another look sideways at Bryce, and the combination of that with the way his teeth were sinking into his plump lower lip had Bryce’s stomach tightening with arousal. This security check might be a hell of a lot more pleasurable than he’d figured. And he was not thinking about Tom Barrington and body searches in the same breath, because that wasn’t helping things settle down in the least.

“Sorry to have kept you,” he said, and sat down at the table. “I figured you’d be another twelve-year-old.”

Tom stared at him, and then he grinned. It was a really good look on him. “I forgot—you had Bressingham visit you, didn’t you?”

“I wondered if it was ‘take your son to work day’ but mom or dad got lost en route,” Bryce said.

“He’s one of Cheung’s protégés,” Tom said, sitting down opposite Bryce. “He’s got potential, apparently.”

“Or a daddy with deep pockets to contribute to a re-election campaign,” Bryce said, and pushed the sugar bowl across the table. Tom nodded in thanks and took a spoonful.

“So what do you need to know?” Bryce asked, all business again. The thought that the sooner they got business done, the sooner they might get to other things was not in his mind at all. No way.

Joy Lynn Fielding is a sucker for happy endings. She believes, however, that if characters don’t suffer along the way, they won’t fully appreciate being happy. Not all of her characters thank her for this viewpoint, but what do they know?

Joy lives in a small English market town, but also inhabits a number of fictional worlds at any one time, reflecting what she’s writing and what she’s reading. She has a tendency to share enthusiastically with anyone who will listen to the latest fascinating facts she’s stumbled across in her research for books. Thankfully she has a very patient Labrador, who has a gift for looking as though he’s interested in what she’s saying while he waits for the food to arrive.

a Rafflecopter giveaway
Posted by Unknown at 15:01