We have a fantastic group of authors here today to talk about the book Not in the Stars. 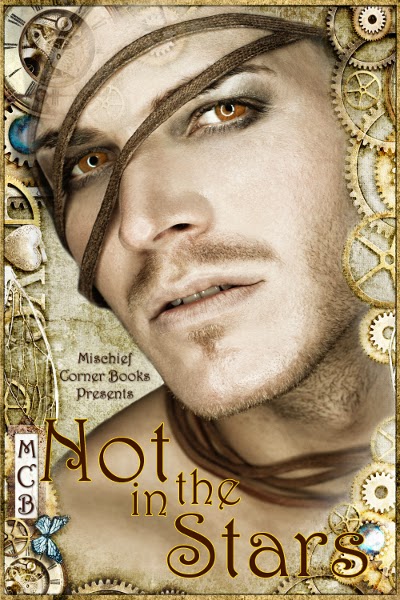 Since the dawn of human expression, man has gazed up at the heavens in wonder, inspired by the wheeling of the stars to explain his surroundings. While our perception of those surroundings have changed, from thinking of the Earth as a flat, stable plane to realizing we’re falling through space in a tiny atmospheric bubble, our wonder remains constant.

Space stations, alien races, far-flung planets—join the Mischief Corner authors as they explore the possibilities the stars might offer. The catch? Returning to mundane old Earth might be harder than you think. 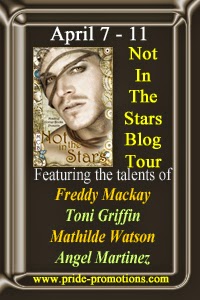 Shax yelped as the trauma ball hummed against his palm, the surface shifting from swirling orange toward yellow. Before it could deliver its nastiest shock, he flung the thing at Verin’s head.

flew as Verin swung his horns and batted the ball away. He aimed right for , who sidestepped and caught the ball as it powered back down to blue. Wings spread for balance, tip of his tongue protruding from the corner of his mouth,  spun and ran the three steps up the ramp at the court’s far end, aiming for the hovering sphere goal.

At the last second, the goal moved left and ’s shot caught the magnetized lip, which hurled the trauma ball back at him at some ridiculous, unsafe speed. Shax winced at the sharp crack when hard ball met angel head.

“Ow.”  flopped down at the top of the ramp, rubbing at his temple.

“Someone gonna explain to me again how this is fun?” Corny called from where he balanced on the swinging planks that made up mid-court.

He’d been stuck on the water hazard for several plays, his muscular body and high center of gravity an indisputable disadvantage since the wrong move would send him into the water and cost him a five minute penalty. Their cowboy had figured out the hard way in the first quarter that the pool itself enforced the penalty and didn’t let the penalized player out a second before.

Good thing he can tread water.

The ball was now happily rolling along the elevated sidewall ramps and Shax prepared to jump for the rings that would put him at the right height to catch it when it rolled free. Had they been playing teams…but no one could agree on a fair way to pair the four of them up, so solo it was.

Shax cocked his head, listening to the rumble of the ball as it trundled downward.  was still on the ramp. Corny was stuck. Verin was navigating the sponge quadrant where his claws were sticking. Perfect. He leapt, caught a ring in either hand, got a good swing going, and let go with his right hand just in time for the ball to drop from the chute.

With a whoop, he swung free and dropped with the ball clutched to his chest, only to be hit from behind with the force of several megatons. Wind knocked out of him, he could only watch as Verin snatched up the ball.

“Attempted murder isn’t supposed to be part of the game,” he wheezed as Verin took his shot. It seemed to be too far right, but the sphere turned and the ball shot inside.

“You’re all right, you baby,” Verin growled. “Get up before you really get fucked up.”

Shax heaved himself to his feet, staggering a few steps before the floor decided he’d been in one place too long and started bucking.

All four of them managed to reach the sand quadrant closest to the near goal where they crouched in anticipation, waiting for the sphere to spit out the ball. Shax got Verin’s elbow in his ribs and a playful shove from Corny as they jockeyed for position but they might as well have stood still. The sphere rumbled and disgorged the trauma ball with a hacking cough, sending it high and wide. , with his superior height and reach, snagged it easily, holding it up to keep it out of reach.

Any second, Verin and Corny would charge him and then Shax wouldn’t have a chance. An evil thought percolated in his mind and he sidled up close to Ness, blew a breath across his bare nipple, and reached down to cup ’s balls through the tight game shorts. A strangled whimper caught in ’s throat. His jaw slack, eyes saucer-wide, he fumbled the ball and dropped it.

Shax caught it before it hit the sand, snatched a quick kiss, and bounded away toward the far goal. He slammed the trauma ball into the sphere just as it hummed over to yellow again.

Mischief Corner Books is an organization of superheroes... no, it's a platinum-album techno-fusion group...no, hold on a sec here...

Ah, yes. Mischief Corner is a diverse group of authors who met on a mountain in  and decided since we probably were too easily distracted to rule the world that we'd settle for causing a bit of mayhem instead.

In addition to making mayhem, we are releasing books as a consortium. The books cover a diverse range of genres and topics... we live to break molds. Our books are available through Amazon, Barnes and Noble, ARe and other outlets.