One of my good friends, Lex Chase has a new book release coming up in a few days. How many days? THREE. In three days, you can read the second installment of Pawn Takes Rook, and believe me, you'll want to.

Lex is here today to talk about her book and the music she feels goes best with her new story.

Spinning on its Axis: The Sounds of Axis City

Hello everyone! I’m Lex Chase and Cate as let me take control of her blog today. She’s a very trusting soul. I’m here celebrating the pre-release of Pawn Takes Rook: Cashing the Reality Check, the second book in the Checkmate Series from Dreamspinner Press. It’s a pretty silly series, and a bit of an emotional rollercoaster that follows disgraced superhero Memphis Rook and his rise to redemption alongside his sidekick/boyfriend Hogarth Dawson. If you haven’t given the Checkmate series a try yet, it’s not too late to catch up! With the release of Cashing the Reality Check on August 7th, Dreamspinner is having a sale on Checkmate #1, Pawn Takes Rook from the 6th to the 12th! 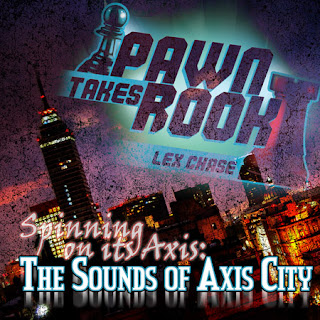 I’m sharing something very special with you guys today, a score to the Checkmate series to maximize your reading pleasure! Spinning on its Axis: The Sounds of Axis City is a completely instrumental mix that reflects the overall feel of the wondrous megacity that Rook and Garth call home. I chose sounds that will make you stomp your feet and make you want to take on the world! As a suggestion, you should listen with earbuds and FEEL DAT BASS!

Did you give a listen and enjoy? Let me know in the comments below! I’m also having a giveaway of some awesome swag on every stop! One lucky winner will receive a set of Series 1 and Series 2 Checkmate buttons, a Lex Chase.com pen, and both Checkmate covers! August winners to be announced August 31st! 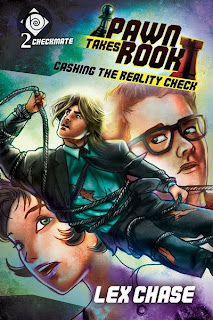 Even after eleven months of keeping the mean streets of Axis City safe, superduo Checkmate—Hogarth Dawson—and his boyfriend, Memphis Rook, still receive the cold shoulder from the Power Alliance. Undeterred, Hogarth brings his intense focus to bear on Rook, and after Hogarth makes an accidental marriage proposal, it becomes all too clear Rook isn’t quite at the same place. But before life gets awkward, duty calls.
Booted-off female contestants of the romantic reality show Single and Super are being found in comas, and Checkmate needs to get to the bottom of it. As part of Rook’s plan, he cleans up his bad boy image and goes undercover as a bachelor looking for love among twenty-five frenzied women. Against Rook’s wishes, Hogarth sneaks onto the set as a cameraman to investigate the case on his own. With questions unanswered between them, emotions run high, distracting them and feeding a trap of their own making.

Rook’s lips parted to speak, then shut, then parted again, then finally shut. He rumbled a thunderous laugh. “You dirty minx.” He closed the distance between us in less time it took to blink. The padded palms of his fingerless gloves cupped my rear, and he scooped me up before dropping me hastily on the desktop.
The loud thump of the desk smacking the wall made me curl my fingers into his coat lapels. “Shhh!” I warned him. “Do you wanna get caught?”
He leaned in and nipped my ear, his tongue exploring my lobe. I might have squealed very inappropriately. Might have.
“Don’t you wanna get caught?” he growled, planting searing kisses on my neck. His hands roved my cold body and the soft pads of his gloves coupled with his hot fingers sent sparks up my spine. I parted my legs wider, ready to accommodate whatever he was going to throw my way. He pulled his teeth away from my neck in a long scrape, and he slanted his mouth over mine. I gasped into him, and our tongues met in a starved need to taste one another. With a deft flick of the wrist, Rook stroked me easily between two broad fingers. My stomach tightened with the intimate contact, and I buried my fingers in his hair. He chuckled against my mouth and captured my bottom lip with one of his pronounced canines. Rook pulled away for the slightest of seconds to watch my reaction as he teased at my entrance with his fingers, trying to relax me enough into relenting for him.
“Do it,” I said, and it came out like a begging whimper. “It’ll only hurt for a second,” I lied out my—wait. This metaphor is really inappropriate for this moment. I just lied, okay. The laws of physics when it comes to me and Rook getting busy boggle the mind. I always get the feeling somewhere he’s concerned about hurting me, but I can’t seem to make him understand it’s that pain of him just being him that sets me off into the stratosphere. “It’s okay,” I whispered. “It’s—” I started to say but broke into a high pitched crack when he entered me with two fingers.
I turned up my chin to kiss him again as he tenderly worked me over. All the troubles of the world seemed to melt away when we were like this. No ruined apartments to worry about how to fix. No case to fret over. Nothing. We were just two guys, stupidly crazy about each other, and on a mission to get each other naked as often as possible.
Here’s the kicker though—you might want to sit down for this part.
Ever get that moment where everything is just so incredibly perfect that out of your mouth comes the stupidest thing ever? Well, yeah. Stupid comment in three… two… one….
“Marry me…,” I groaned. I needed him and needed him now in every possible way. My body ached for him.
Rook, on the other hand, froze faster than Han Solo taking a dip in carbonite. “Hogarth,” he said flatly. His hands rested on the desk next to my thighs.
I searched his face, hunting for what I could have possibly said and turned the mood to a steaming pile of shit. “Why not?” I asked. “I love you, you love me, Axis City legislation made it legal, we want to be together forever, and—”
“Hogarth,” he spat, then turned away. He ran a hand through his long blond hair and tugged at his roots.
I knew that completely at-a-loss gesture all too well. And I became far too aware that I was naked. Like way naked. Like that dream of being in high school in your underwear. My lip quivered. It could only mean one thing, one horrible thing, and I was going to be the overdramatic boyfriend.
“You don’t… love me?” I said, and my voice cracked as all my insecurities flopped out like a beached beluga. And there I earned my dubious place in Encyclopedia Dramatica.
Rook spun to face me, waving his hands quickly in a halting gesture, “Jesus, no! It’s not like that, okay?”
Somehow this didn’t exactly inspire confidence; shocking, am I right?
He brushed a long streamer of blond from his eyes and palmed his face. “Do you even have any idea how intense you are?”
You know… if the world could suddenly open up and swallow me whole, that would be just ducky. I wanted to tell him: “Here, Rook, here’s my heart. Just for you. Shattered like glass into a million tiny shards. I hope you fucking choke to death when you eat it.”

Bio:
Lex Chase is a journalist by day and a writer by night. Either way you slice it, she makes things up for a living. Her style of storytelling is action, adventure, and a dollop of steamy romance. She loves tales of men who kiss as much as they kick ass. She believes it’s never a party until something explodes in a magnificent fashion, be it a rolling fireball of a car or two guys screaming out their love for one another in the freezing rain.