May Update Amid the Chaos

I figured I should do a May update while it is still May. Things have just been so busy lately, I've barely had time to breathe, so I'm taking some time to get caught up on things tonight. Here's what has happened in the last month:

In my writing world: 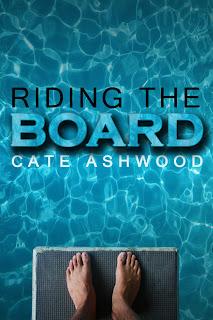 1. Riding the Board comes out in a few days. June really has crept up on me and I didn't even realize it's less than two weeks away. I haven't even really told very many people about it. Sometimes life just gets in the way of my plans. It's actually quite annoying.
There's still time to take advantage of the discounted Daily Dose and get a whack of great stories from some amazing authors for a pretty low price.
You can see the list of stories here: http://www.dreamspinnerpress.com/store/product_info.php?products_id=3838&cPath=63_854

2. I've decided to go to the Gay Romance North-West Meetup in Seattle. If you're from the area and can make it, you should come. Registration is really affordable (only $15 if you register early, and $25 if you don't), and they've got a good lineup of authors going. I believe the venue only holds 275, so register early if you can. It's going to be a blast!
Here is the link for their website where you can register: http://gayromancenorthwest.wordpress.com/


3. While I was in Disneyland (already the Happiest Place on Earth), I received an email from Dreamspinner Press letting me know that they were contracting my Hope Cove series. I can't tell you how excited I was. I danced (which is totally acceptable in Disneyland). There are three novels in total, and the first one is due to hit shelves in November of this year, the second in December and the third in January. It's going to be a very busy summer/fall, but I am so looking forward to it.

4. Skylar M. Cates and I have begun working on a co-authoring project. We intended to write it over the summer, but once we got started talking about it, we were too excited to wait. So... less than two weeks into it, we're almost done!
The novella follows the two main characters: Trey a punk rock star who comes from an over-privileged family, and Liam, a classical violinist and teacher. I will have more details to release soon, but for now I think it's going to be pretty good!

5. I am the luckiest little writer in the world because I get to beta read some really amazing stories. I will keep you updated on which ones as they become available, but let's just say that there are some pretty awesome stories that are going to be coming out in the next year.


In My Personal World:

1. I'm a vampire. Okay, not really, but I am getting pretty good at phlebotomy. I started my practicum at the lab and hospital. I am living with my aunt for a month while I'm here, and so far things have been going really well. I wasn't entirely sure I would like my new job (because nobody likes hurting people and even fewer people like needles), but I am finding that I am really enjoying it. Not so much stabbing people with a 21-gauge, but the talking to people and interacting with them. It's nice to be the person that gets to make a painful experience maybe just a little less awful. 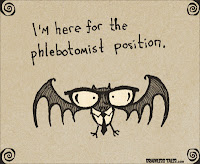 I'm also finding the science-y side of it really interesting. I've always liked biology, but getting right down into it has been good. And fun!
There are some downsides too. I've only been on the job for two weeks, and have already seen some pretty sad stuff. I almost lost it the other day with a mom who was crying because the doctors were trying to decide between two pretty horrible diagnoses for her little boy. That was hard.
There have been some surprises along the way too. When I walked in there I expected that there would be some people who would feel nervous or maybe faint (my sister is one of those people), what I didn't expect is for them all to be big, muscular, tough-guys. I had a guy yesterday that almost collapsed on me (although, this guy, I wouldn't have minded so much ;) )

2. My sister is back in Canada. I can't tell you how happy I am not to live on the other side of the continent from her. She's only a 45 minute flight away now, rather than a 7 hour one, so I am a pretty happy camper, but am hoping that she decides to move to Vancouver so we'll be even closer! A girl can dream.


That is all the news I can think of for now... Although my brain feels pretty scrambled, so there are no guarantees that I didn't miss something really important.