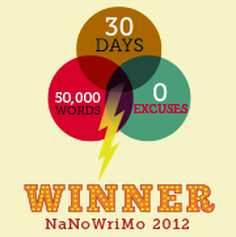 So NaNoWriMo is officially over. I'm hoping everyone that participated feels like they accomplished something great whether they got to 50K or not.

Three months ago I had never heard of NaNo. It was completely new for me and what an experience. Talk about lighting a fire under your ass. Seeing other people's word counts rise around me made me want to write...and I'm not a competitive person. Unless we're playing Monopoly. Then I'll kick your ass.

I'm pretty proud of what I managed to accomplish for my first time though. I wrote just over 68,000 words, 52,000 of which were on the second installment of my three part Hope Cove book series. Now I just have to finish the last little sections on the first two, write the third one in its entirety and hopefully they will be ready for submission sometime after Christmas.

I am going to try and get some freebies and excerpts posted up here in the next couple of weeks, so all of you who read this (a.k.a. Mom) you have that to look forward to!
Posted by Unknown at 22:55