The Start of a Revolution 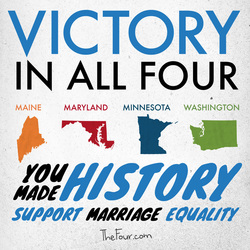 What a wonderful week for America and the rest of the world that stood watching, waiting for history to be made, and history certainly was made. Four states voted and either approved changes for or overturned bans on same-sex marriage.

This is a long overdue victory for gay people across the country, as hopefully these four will just be the start of a nationwide show of support for love, and ultimately that's what this is all about. The freedom to love the person you choose; a freedom which should be universal for everyone, but unfortunately we are still living in a society where some people are holding onto prejudice and bigotry. Maybe though, one day soon the number of people who believe in love will outnumber the people that are holding onto hate.

Author Rick R. Reed and his partner, Bruce, announced their engagement the day after the vote was finalized. They live in Washington and are now able to be legally married. They have been married in almost every sense for the last ten years, but now their home state will recognize their relationship. It is such an exciting time for so many couples. Read the story in Rick's words at Rick R. Reed's Blog.
Posted by Unknown at 22:49